The research conducted in the Department of Molecular Biology mainly focuses on the activity of molecular chaperones in mammalian cells, including cell transformation. Using highly purified recombinant human proteins, we previously identified intermediate reactions that led to the assembly of molecular chaperone complexes with the wildtype or mutant p53 tumor suppressor protein. We also demonstrated that the heat shock protein 90 (HSP90) molecular chaperone was required for the binding of wildtype p53 to the promoter sequences under a physiological temperature of 37ºC and that chaperoning activity was adenosine triphosphate (ATP)-dependent. We recently provided in vivo evidence that HSP90 and HSP70/HSPA chaperone machines were required for the proper folding of wildtype p53, its specific binding to chromatin, and the transcription of p53-dependent genes (Walerych et al., Oncogene, 2009). We showed that molecular chaperones in human cells transfected with wildtype TP53, HSP90, and HSP70 maintained the native p53 conformation under heatshock conditions (42ºC) and assisted with refolding p53 at 37ºC during the recovery from heat shock. We also demonstrated that the interaction between wildtype p53 and the WAF1 promoter in cells was sensitive to HSP70 and HSP90 inhibition at 37ºC and further decreased upon heat shock. The influence of chaperones on the binding of p53 to the WAF1 promoter sequence was confirmed in vitro using highly purified proteins.
HSP90 stabilized the binding of p53 to the promoter sequence at 37ºC, whereas the requirement for the HSP70-HSP40 system and its cooperation with HSP90 increased under heat shock conditions. The Hop co-chaperone additionally stimulated these reactions. Interestingly, the combination of HSP90 and HSP70-HSP40 allowed for a limited in vitro restoration of DNA binding activity by the p53 oncogenic variant R249S and affected its conformation in cells. Our results indicated that both HSP90 and HSP70 were required for the chaperoning of wildtype and R249S p53, especially under stress conditions (Walerych et al., Oncogene, 2009).
We also elucidated the role of the adenine nucleotide in the HSP90 chaperone cycle by taking advantage of a unique in vitro assay that measures the HSP90-dependent binding of p53 to the promoter sequence (Walerych et al., J Biol Chem, 2010). E42A and D88N HSP90β variants bound but did not hydrolyze ATP, whereas E42A increased and D88N decreased ATP affinity compared with wildtype HSP90β. Nevertheless, both of these mutants interacted with wildtype p53 with similar affinity. Surprisingly, in the case of wildtype and E42A HSP90β, the presence of ATP stimulated the dissociation of HSP90-p53 complexes and resulted in the binding of p53 to the promoter sequence. D88N HSP90β is not efficient in either of these reactions. Using a trap version of the GroEL chaperonin, which irreversibly captures unfolded proteins, we showed that the action of the HSP90 chaperone on wildtype p53 resulted in a partial unfolding of the substrate. The ATP-dependent dissociation of the p53-HSP90 complex allowed further folding of the p53 protein to an active conformation that was able to bind to the promoter sequence. Further supporting these results, the overproduction of wildtype or E42A HSP90β stimulated transcription from the WAF1 gene promoter in H1299 cells. Altogether, our research indicated that the binding of ATP to HSP90β was a sufficient step for effective wildtype p53 client protein chaperoning (Walerych et al., J Biol Chem, 2010).
Heat shock protein 70 (HSP70/HSPA1) is an evolutionarily highly conserved molecular chaperone that promotes the survival of stressed cells by inhibiting lysosomal membrane permeabilization, a hallmark of stress-induced cell death. Clues to its molecular mechanism of action may lie in the recently reported stress- and cancer-associated translocation of a small portion of HSP70 to the lysosomal compartment. Prof. Marja Jaattela’s laboratory at the Denmark Cancer Institute, in collaboration with our department, showed that HSP70 stabilized lysosomes by binding to endolysosomal anionic phospholipid bis(monoacylglycero)phosphate (BMP), an essential cofactor for lysosomal sphingomyelin metabolism (Kirkegaard et al., Nature, 2010). In acidic environments, HSP70 binds with high affinity and specificity to BMP, thereby facilitating the BMP binding and activity of acid sphingomyelinase (ASM).
Inhibition of the HSP70-BMP interaction by BMP antibodies or a point mutation in HSP70 (Trp90Phe) and the pharmacological and genetic inhibition of ASM effectively reversed the HSP70-mediated stabilization of lysosomes. Notably, the reduced ASM activity in cells from patients with Niemann-Pick disease (NPD) A and B (i.e., severe lysosomal storage disorders caused by mutations in the sphingomyelin phosphodiesterase 1 [SMPD1] gene that encodes ASM) was also associated with a marked decrease in lysosomal stability, and this phenotype could be effectively corrected by treatment with recombinant HSP70. Altogether, these data open exciting possibilities for the development of new treatments for lysosomal storage disorders and cancer with compounds that enter the lysosomal lumen through the endocytic delivery pathway (Kirkegaard et al., Nature, 2010).

We discovered that MDM2, in addition to its E3-ubiquitin ligase activity, exhibited molecular chaperone activity and demonstrated that a MDM2 mutant protein that is defective in ATP binding (K454A) lacked chaperone activity both in vivo and in vitro. Wildtype MDM2 coexpressed with wildtype p53 stimulated effi cient p53 protein folding in vivo, and this effect was abrogated with an ATP binding-defective form of MDM2 (Wawrzynow et al., J Biol Chem, 2007).
Recently, in collaboration with Prof. Kathryn Ball at the University of Edinburgh, we showed that the binding affinity of MDM2’s hydrophobic pocket could be regulated through the RING finger domain and that increases in pocket affinity were reflected by a gain in MDM2 transrepressor activity (Wawrzynow et al., J Biol Chem, 2009). Thus, mutations within the RING domain that affect zinc coordination but not mutations that inhibit ATP binding produce MDM2 proteins that have a higher affinity for the BOX-I transactivation domain of p53 and a reduced affinity for p53 transrepression. An allosteric model of the regulation of the hydrophobic pocket was supported by differences in protein conformation and pocket accessibility between wildtype and RING domain mutant MDM2 proteins. Additionally, the data demonstrated that the complex relationship between different domains of MDM2 could impact the efficacy of anticancer drugs directed toward its hydrophobic pocket (Wawrzynow et al., J Biol Chem, 2009).
Numerous p53 missense mutations possess gain-of-function activities. Studies in mouse models have demonstrated that the stabilization of p53 R172H (R175H in humans) mutant protein by currently unknown factors is a prerequisite for its oncogenic gain-of-function phenotype, such as tumor progression and metastasis. Recently, we showed that the MDM2-dependent ubiquitination and degradation of p53 R175H mutant protein in mouse embryonic fibroblasts was partially inhibited by increasing concentration of HSP70/HSPA1-A. These phenomena correlated well with the appearance of HSP70-dependent folding intermediates in the form of dynamic cytoplasmic spots that contained aggregate-prone p53 R175H and several molecular chaperones (Fig. 1). We propose that a transient but recurrent interaction with HSP70 may lead to an increase in mutant p53 protein half-life. In the presence of MDM2, these pseudoaggregates can form stable amyloid-like structures that occasionally merge into an aggresome Interestingly, the formation of folding intermediates was not observed in the presence of HSC70/HSPA8, the dominant-negative K71S variant of HSP70, or an HSP70 inhibitor. In cancer cells, where endogenous HSP70 levels are already elevated, mutant p53 protein formed nuclear aggregates without the addition of exogenous HSP70. Aggregates that contained p53 were also visible under conditions in which p53 was partially unfolded (i.e., 37°C for temperature-sensitive variant p53 V143A and 42°C for wildtype p53). The refolding kinetics of p53 indicated that HSP70 caused transient exposure of the p53 aggregate-prone domains. We propose that the formation of HSP70- and MDM2-dependent protein coaggregates in tumors with high levels of these two proteins could be one of the mechanisms by which mutant p53 is stabilized.
Our results suggest that HSP70 molecular chaperone binds and partially unfolds p53. Upon ATP-dependent release of HSP70 from the complex with p53, part of the unfolded p53 protein, with the help of MDM2, is captured in the aggregationprone conformation (Fig. 2). Moreover, the sequestration of p73 tumor suppressor protein by these nuclear aggregates may lead to gain-of-function phenotypes (Wiech et al., PLoS One, 2012). 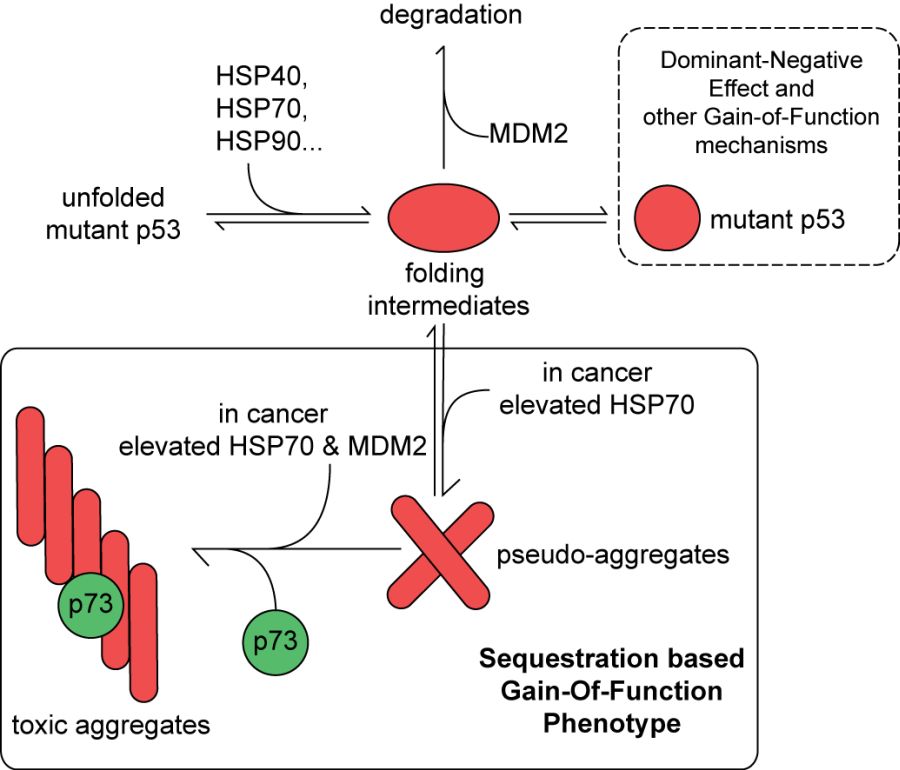 Fig. 2. Proposed model for stabilization of mutant p53 in cancer cells. Pro-oncogenic, gain-of-function phenotype of mutant p53 is governed by HSP70 and MDM2 levels. Recurrent interaction of HSP70 with the p53 polypeptide, in an ATP dependent manner, causes transient exposure of its aggregate prone domain(s). Subsequent aggregation of mutant p53 is further augmented by the MDM2-p53 allosteric interaction. This dynamic, irreversible molecular process can sequester other tumour suppressors, such as p73, thus inhibiting their activity. Pro-oncogenic activities of mutant p53 can be manifested through other, non-sequestration based mechanisms as depicted. We cannot exclude the possibility that molecular chaperones, including HSP70, are also involved in these processes. 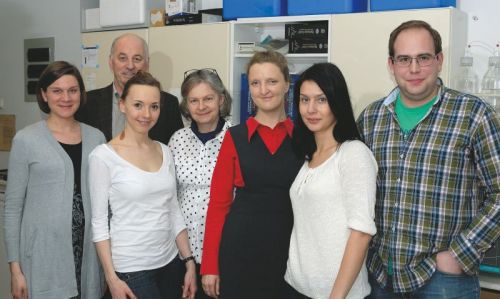 Diverse and cancer type‑specific roles of the p53 R248Q gain‑of‑function mutation in cancer migration and invasiveness.

Wawrzynow B, Zylicz A, Zylicz M.

Chaperoning the guardian of the genome. The two-faced role of molecular chaperones in p53 tumor suppressor action.

NeuroMorph: A Toolset for the Morphometric Analysis and Visualization of 3D Models Derived from Electron Microscopy Image Stacks.

Molecular Mechanism of Mutant p53 Stabilization: The Role of HSP70 and MDM2

ATP binding to Hsp90 is sufficient for effective chaperoning of p53 protein.

Mutations that increase both Hsp90 ATPase activity in vitro and Hsp90 drug resistance in vivo.

A function for the RING finger domain in the allosteric control of MDM2 conformation and activity.

Mathematical modelling of the influence of heat shock proteins on cancer invasion of tissue.

ATP stimulates MDM2-mediated inhibition of the DNA-binding function of E2F1.

The mammalian CHORD-containing protein melusin is a stress response protein interacting with Hsp90 and Sgt1.

Fhit proteins can also recognize substrates other than dinucleoside polyphosphates.

Potentiated antitumor effects of the combination treatment with statins and pamidronate in vitro and in vivo.

Potentiated antitumor effects of the combination treatment with statins and pamidronate in vitro and in vivo.

Characterization of testis-specific serine-threonine kinase 3 and its activation by phosphoinositide-dependent kinase-1-dependent signalling.

Hsp90 regulates the activity of wild type p53 under physiological and elevated temperatures.

Structure-function analysis of the zinc-binding region of the Clpx molecular chaperone.

Insights into the function of Hsp70 chaperones.

Structure-function analysis of the zinc-binding region of the Clpx molecular chaperone.

Insights into the function of Hsp70 chaperones.