Gene expression in eukaryotes is regulated at multiple levels, from chromatin structure, transcription, pre-mRNA processing, and mRNA export from the nucleus to mRNA stability and translation. The primary research interest of the laboratory is the regulation of gene expression at the posttranscriptional level. In the past, we were interested in mechanistic aspects of RNA metabolism. We are currently studying RNA biology at the organismal level using transgenic mouse lines as a main research model. Our research focuses on two areas:

ANALYSIS OF THE FUNCTION OF PROCESSIVE RIBONUCLEASES

Processive exoribonucleases play a major role in eukaryotic RNA turnover and processing. Some act in the 3’-to-5’ direction, such as the exosome complex or monomeric ribonuclease DIS3l2 (Fig.1). Alternatively, RNA molecules can be degraded or processed from the 5’end by enzymes that belong to the XRN family of RNases. Importantly, the dysfunction of exoribonucleases is often associated with human diseases. The nuclear catalytic subunit of the exosome DIS3 is one of the most frequently mutated genes in multiple myeloma, a cancer of plasma cells. Mutations of DIS3L2 are associated with Perlman syndrome, a rare genetic overgrowth disease. We previously analyzed the mechanism of action and substrates of exoribonucleases using cellular model systems. 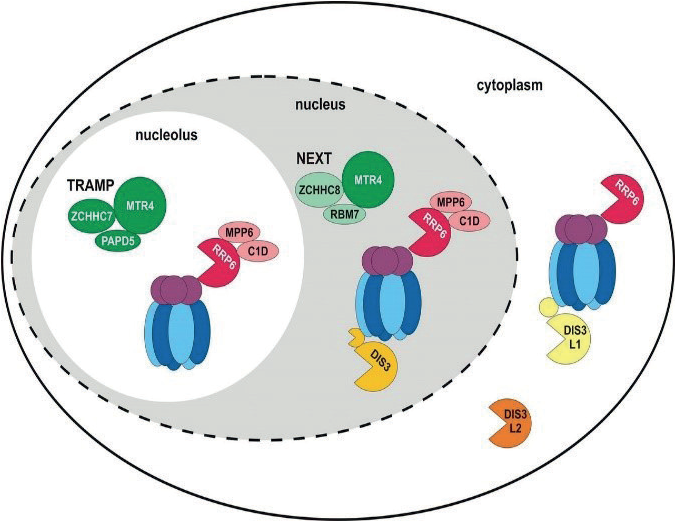 In the past, we identified catalytic subunits of a primary eukaryotic ribonuclease, the exosome both in yeast and humans (Dziembowski et al., Nat Struct Mol Biol, 2007; Tomecki et al., EMBO J, 2010). We also showed that the complex, in addition to exonuclease activity, is also an endonuclease (Lebreton, Tomecki et al., Nature, 2008). We participated in biochemically and structurally characterizing the exosome, which together with the work of others elucidated its mechanism of action (Drazkowska et al., Nucleic Acids Res, 2013; Hernandez et al., EMBO Rep, 2006; Lorentzen et al., Mol Cell, 2008; Lorentzen et al., EMBO Rep, 2007; Malet et al., EMBO Rep, 2010). The exosome needs cofactors for its full activity. We described such complexes in human cells (Kalisiak et al., Nucleic Acids Res, 2017; Lubas et al., Cell Rep, 2015; Lubas et al., Mol Cell, 2011). We also determined the nuclear exosome substrates that proved that this complex plays a primary role in shaping the human transcriptome by degrading various pervasive transcription products (Szczepinska et al., Genome Res, 2015). Finally, cancer genome projects revealed that the catalytic subunit of the exosome DIS3 is frequently mutated in multiple myeloma. We identified vulnerabilities that are associated with such mutations to propose a novel drug target (Tomecki et al., Nucleic Acids Res, 2014). In the future, we will investigate functional interactions between RNA-degrading enzymes and other cellular pathways that are involved in the expression of genetic information. In parallel, we will analyze the role of selected exoribonucleases using transgenic mouse models. Finally, we are interested in the role of mutations of DIS3 in the pathogenesis of multiple myeloma.

Most mRNA molecules are polyadenylated during classic 3’-end formation by canonical poly(A) polymerases. The poly(A) tail greatly enhances protein synthesis through its interactions with poly(A) binding proteins, which protect the mRNA 3’ end from exoribonucleolytic decay and directly interact with translation-initiation factors to promote translation. It is now known that poly(A) tail dynamics are more complex than previously suspected. Deadenylated mRNAs in the cytoplasm can be degraded, uridylated, or stored in a dormant state to be later re-adenylated to activate protein synthesis. The enzymes that are responsible for modifications of the poly(A) tail are non-canonical poly(A) and poly(U) polymerases. Analyses of the human cytoplasmic poly(U) polymerases TUT4 and TUT7 led us to an unexpected discovery, in which uridylation was found to be a potent restrictor of retrotransposition of the LINE-1 element, the only active autonomous transposon in humans (Fig.2) (Warkocki et al., Cell, 2018). We are currently focusing on cytoplasmic polyadenylation rather than uridylation. 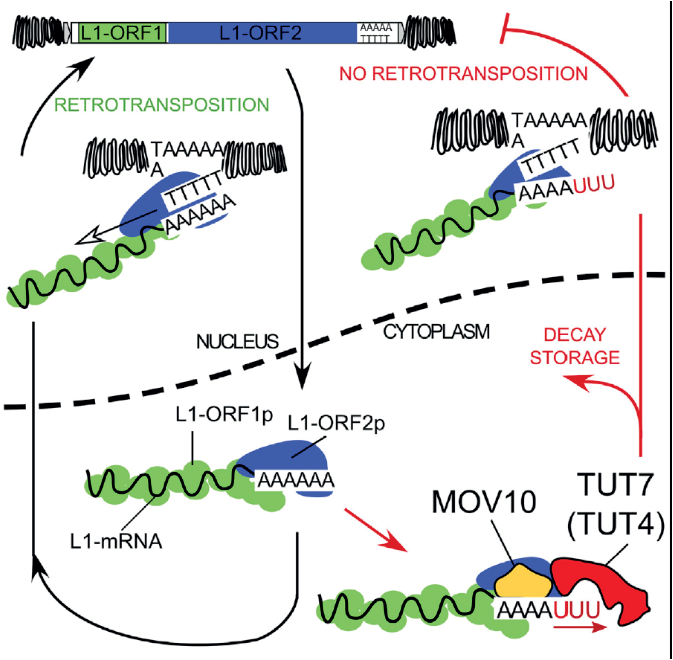 fig.2. Model of restriction of LINE-1 retrotransposition by uridylation (based on Warkocki et al., Cell, 2018).

Cytoplasmic polyadenylation was mostly studied in the context of gametogenesis and in neuronal synapses, where transcriptional activity is limited. Surprisingly, mouse lines that were devoid of the cytoplasmic poly(A) polymerase GLD2 (TENT2) exhibited no apparent phenotypes. We recently described a novel family of cytoplasmic poly(A) polymerases, TENT5 (FAM46), which comprise four members in vertebrates: TENT5A-D. TENT5C acts as a tumor suppressor in multiple myeloma (Mroczek et al., Nature Comm, 2017), whereas mutations of TENT5A lead to a rare genetic disease, osteogenesis imperfecta. We generated knockout and knock-in (GFP/FLAG-tagged) mouse models for all TENT5 family members using CRISPR/Cas9 technology. Although knockouts of these genes are not lethal, we detected a plethora of different phenotypes that affect several organs and biological processes. In the future, we will dissect the functions and mechanisms of cytoplasmic polyadenylation by TENT5 in gametogenesis, innate immunity, hormonal regulation, and neuronal physiology. We will use animal models and advanced transcriptomic and proteomic approaches. An important element of the proposed studies is the refinement of methodology for genome-wide analyses of the global state of polyadenylation.

Mus musculus is a mouse model of choice for functional studies of human health and disease. Surprisingly, there is currently no facility that routinely generates mouse models by gene targeting approaches in Poland. During our work on the TENT5 and DIS3 protein families, we began efforts to implement CRISPR/Cas9 technology for the generation of transgenic mice. The method proved to be extremely efficient in our hands. Within the past 3 years, we have generated more than 20 different mouse lines with mutations in the locus (indels, point mutations, and tags). This prompted us to establish a core facility (https://crisprmice.eu) that has the potential to foster the usage of new mouse models in biomedical research in Poland. 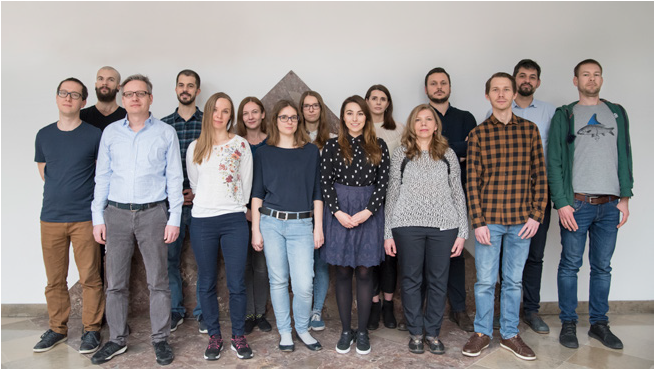 Functions and mechanisms of RNA tailing by metazoan terminal nucleotidyltransferases.

Cytoplasmic polyadenylation by TENT5A is required for proper bone formation.

Immunoglobulin Expression and the Humoral Immune Response Is Regulated by the Non-Canonical poly(A) Polymerase TENT5C.

Mitochondrial protein biogenesis in the synapse is supported by local translation.

Structure and mechanism of CutA, RNA nucleotidyl transferase with an unusual preference for cytosine..